When the song ended I endeavoured to do my best to calm Bogdan and try to convince him not to worry about his toasted skin.

I read through the article in the paper and noted that it mentions near the end that toasted skin is pretty harmless and only in very rare cases do you get melanoma from it. Bogdan was relieved at this and observed, as much for my benefit than for his, that he had no moles on his legs and as “its moles that are the main things on your body that are infected by things like sunlight and UV light and general heat like from a microwave then I’ve nothing to worry about. And if I’m about to buck a girl for the first time I’ll tell her the burns are from saving a whole family, 3 generations, from a house fire.”

Bogdan then went on to rant and rave in a generally unfocused monotone about moles and people with moles, taking in Cindy Crawford, Enrique Iquelzies and Robert De Nero. In order to get him off the subject I suggested we go online to look for Porn-a-Likes...

So me and Bogdan made some time inventing a story for Denise Robertson and her foray into the world of vice and concluded that what had happened to the poor old duck was that she were taken in by some New-Age sex therapist guru who schooled her in the ways of “cognitive sexual workings out of the problems of the mind” as Bogdan put it. After she left the guru’s enclave in South America Denise went back on This Morning and began to use the guru’s teachings on the bevy of young men that ring into her helpline looking for ways to spot genital warts and AIDS. 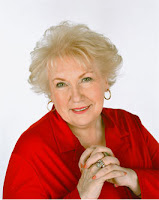 Here she is photographed in a sting operation set up by the News Of The World who have hired a rentboy and give him journalist credentials (Like Jeff Gannon). When the story broke Denise set up an elaborate ruse where a recording of her own voice was rung into her helpline live on This Morning. Her recorded voice went through a list of the terrible things that’d happened to her since the story broke and Denise live in the studio’s eyes glazed over and she began to cut herself with a switchblade that she pulled out from her substantial cleavage. Scoffield and Holly Willobry go apeshit and Denise, thrown by their thespianic startled-ness, proceeds to stick Scoffield in the Adam’s Apple and cut both Holly’s tits off. 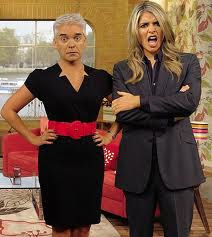