...In The Dark Your Hair's Just As Red, And This Long Dark Cave Will Always Be Our Wedding Bed

Today my face began to flake off in a scaly reptilian fashion, uncovering by slight, incremental degrees a red raw tissue underneath.
I became very worried by this. I put it down to semi alcoholism and dodgy amphetamines. Kidneys long ago packed in and a liver that hurts like fuck unless I sit a certain way.
A while after noticing this I stood admiring myself in my bathroom mirror for the longest time. Smoothed out my decolletage and tensed my abs. I turned and stood side on, inspecting my arse and my posture. Then I went out. 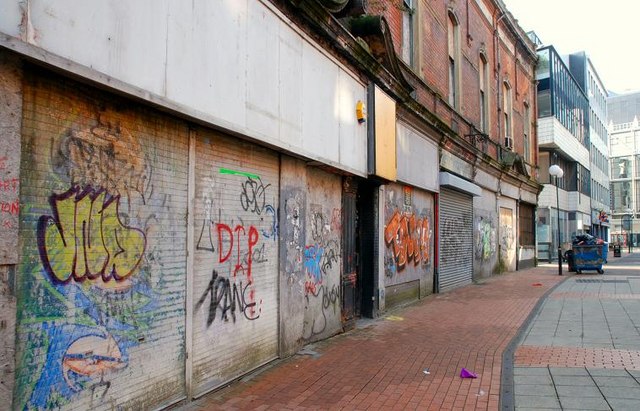 I found myself on North Street walking along breathing in the heavy, charged pre-rain air and smiling at the vexed and impatient faces of the people shuffling past, hurrying to bus stops or taxi ranks in order to get in before the downpour.
I passed a hairdressers someway along, coming to near the end of the street, where I found my old chum from high school Pink Eye sitting in a shop doorway busking by strumming a ukulele.
To begin with he greeted me with a profound expression of incredulous misidentification when I insisted it were I, Danny Pongo. He could not believe the short, shy beanpole he used to go to school with had expanded into squat and gregarious little roly-poly me.

He packed up his ukelele and took me round to the Deer's Head for a drink. Over our first he told me how after he got expelled for selling blow to first years (he were 15, in 4th year at the time) his da got him working pro bono on the bin rounds across Belfast, in a type of recompense for his bold behaviour in school.
So he pulled his socks up, straightened out and got on with it.
After he turned 18 he got paid the regular wage, just like rest of them on the rounds. Then he were promoted to the street sweeper van. And by then kids with the wife he had, and the one kid with the wife he'd left, had come about in the course of living. Add into the mix a regular and heavy gambling habit and poor old Pink Eye, always, at months' end, without fail, would always come up a little short in the cash flow department.
So he came up with a money making scheme that saw him taking the street sweeper van around independent taxi firms every evening at the end of his shift with the offer of cheap petrol. The cabbies took him up on it and Pink Eye got a roaring trade going siphoning what juice was left in the tank after his shift and selling it on.
Then the nosey parkers, as they do, got involved. Started 'making enquiries' and Pink Eye's shenanigans got investigated by head office. It didn't take them long to catch him in the act, and not even his father, who'd put in 30+ years collecting bins, could grant him any clemency. 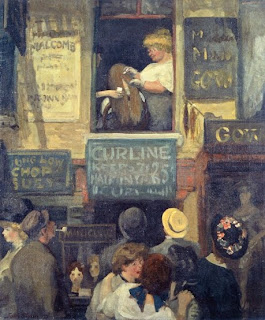 So Pink Eye were on the street, hustling, but very green round the gills. He took up with this woman (who worked in the hairdressers he were busking outside of today) and had a brief but passionate tryst with her. So passionate that in the space of a week or two he'd wooed himself into her house and ended up living there for not a short while. Then she took a liking for another fella, a boy that come in to get his hair cut with her at the hairdressers (who would request she did it, specifically) and Pink Eye was out on his arse again, twice in 6 months.
But he had, in the short time he'd been with her, become infatuated with the girl. He took to writing her simple little ballads and playing them on the ukulele outside the hairdressers. She tried to get a restraining order out on him, but Pink Eye did some law book swotting and found that he was well within his rights to busk in the vicinity of her hairdressers.
Which is what he did every afternoon.
My heart was warmed by this tale, and a tear swelled in the corner of my eye. I got embarrassed and excused myself from the table. Went and put this un on the jukebox:
Posted by Danny at 02:09