The next morning back at my place Kimba put me off my breakfast again by going on about the bit of my jumper that ripped off in Mistress’s hedge.

I became too nervous to eat. My tongue dried and became sandy and I couldn’t swallow the big gobful of pancake I had worked back into my mouth.

I went upstairs and boked into the bath. I decided not to wash it away and let her find it instead. With her gag reflex she’d probably boke too, adding to the gross and noxious pallet. And being depraved as she is as well she’d probably climb in there are get washed in it.

After I cleaned myself up and ate some toothpaste off the end of my dirty yellow fingers I did a bit of Luke Rhinehart dice therapy and give myself the following 6 options: 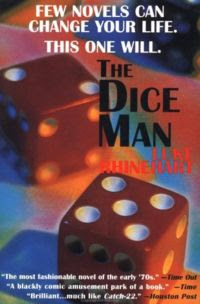 3. Go for a walk. Which direction would be also decided by the dice.

5. Go to Whetherspoons to get pissed.

6. Sit here in the bathroom and look for spiders to feed to Boke the cat.

I cupped the dice in my hands loosely like I were holding a newly born bird, then shook it violently like I were trying to kill it. When my wrists got sore I blew on it like they do on ‘Love Boat’ and things like that, then threw it against the wall. It bounced all over the show: off walls, the ceiling then down off the floor again in that same pattern, as it would as it was made out of the same material bouncy balls are. It landed with a splat in the boke. It read: 1 (Go round to Bogdan’s).

I reluctantly took myself into town to Bogdan’s grubby house, then. I had been hoping for 5 (Go to Whetherspoons to get pissed) and took the bouncy dice with me, throwing it up the pavement going along Castle Street making up options in my head as I went along when this auld soak came out of a bar and kicked it up into the guttering of Poundland, so I decided going to Bogdan’s was what I was meant to do.

- Sometimes, when I’ve driving back from a weed hookup, I like to put this track on and imagine I just shot the dealer and am driving away with his loot and his stash. – said Bogdan filling a bong and hitting play on his cassette stereo.
- I never think that – I said.

We both took a hog of the bong and I tried to adjust my poise to fit with the heavy antsy bassline of Biggie Smalls. After I got myself comfortable Bogdan got up of his beanbag and pulled his baggy jeans down. I reared up a little expecting his ¾ erect red cock to flop purposefully, like a falling tree, from his boxers.

I took a look at his legs and true enough they were red, mottled and spongy at the thigh.

Then I sat back, closed my eyes and wished another number had come up on the dice.
Posted by Danny at 00:02