The Day I Brained Eddie Copeland

The trouble with getting up earlier in the day is you’ve longer to wait for your favourite television shows to come on. That is what I’ve been finding, rising at 8am like I’ve been doing this last week due to the heavy heat.

Quite near my house the Future Brain Surgeons of Northern Ireland have been swarming en masse round the edges of their kingdoms chucking petrol bombs and assorted masonry at the pigs and miscellaneous opposites in neighbouring estates.
I don’t get the same high-octane adrenaline rush I used to when witnessing riots first hand or on the television. 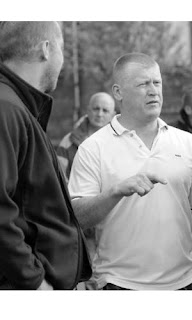 I used to go to riot all the time back when I was a teenager. To begin with I always positioned myself in the centre of the rabble, not too close to the front to risk getting a plastic bullet in the eye or too far to the back to look yellow. I weren’t much of a thrower back in them days. Still amn’t. But the first time I picked up a bit of masonry to chuck at a pig was also my last. It were a quarter-brick with a brush of white paint up the side. It horned off three ways at the end, this brush of white paint. I never forgot it, the most memorable piece of masonry in my life. Well, I stretched my puny arm back, felt the drag in the slight weight of the quarter-brick and threw that thing for all it were worth. It gained more height than distance. For a bit I thought it were gonna fly backward. But it arched thinly when it reached its full height and fell at speed right on the noggin of former political struggler and official riot organiser: all round hardman Eddie Copeland. He fell in a crumpling way, like a sack of spuds cut at the bottom just right after all the spuds fall out. The collective knew instinctively who threw the brick. They rounded on me simultaneously, their fantastic instinct in mentally plotting the trajectory of flying masonry amalgamating in their hive mind dynamic. Then one shouted:
- It were Danny Pongo! – And I ran. Like the wind.

Up above the pigs in their chopper followed my progress over walls and through strangers’ gardens. I were chased by two rotweillers and beat with a broom by an old cunt with ‘sympathies’ for the rioters. Not once did the pigs intervene. Not once. I reckoned they were up there, those sky pigs, on the radio to their ground based colleagues giving them reports on how far I’d got. Probably up there taking bets on how far I’d get. Then, just as a stitch set in, I turned a corner and a hole in the street where a manhole cover’d been torn up provided my escape.
And there I was, Danny Pongo. Down in the sewers splashing in the shite and detritus. My sanctuary and my natural habitat.
So in the years that followed I completely never participated or was ever up there on the front lines with the rest of them. Never had to wrap my face in a heavy football scarf or sport a pair of shades to avoid identification. Just hanging back instead, an autonomous observer. Mostly I used to stand on shop roofs or shimmy up lampposts. I liked to view proceedings from a high vantage point. 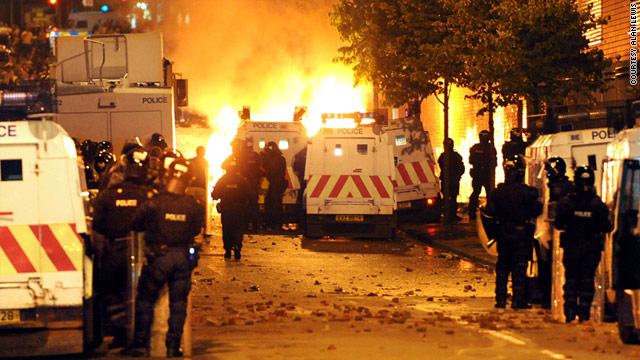 They were far more inventive and resourceful in what they used to throw at the pigs back then. They had javelins, waterbombs filled with piss, used those lasers that can blind pilots and take down airplanes (haven’t seen em this year on the tele), hardened dog shit in a catapult I saw once, golf balls whacked off rooftops, fireworks fired outta pipes like ‘My First Bazooka’ (it were mainly 8 and below that were at this). One novel move they pulled this year was setting a bus on fire and driving it at the police lines. It careered straight into a police landrover injuring all five pigs inside.
I guess the word this year for them was: audacious.
The other day while out to stock up on supplies for over the 12th I included in the shop a porno mag, as my internet’s being a cunt and I can’t watch my blue videos.
I got home and smelled the new magazine smell. It has been years since I’ve bought a blue book and smelled the ‘New Magazine Smell’, - something far removed from ‘The City Stink’ (talked about in last post).
Then I opened it and got my cock out and began playing with myself; stiffening the old ham javelin up in preparedness.
I went at it for ages, just staring at this wet red gash…and it dawned on me, how much of a resemblance a cunt has to a stab wound.

So I put the magazine away and slapped my cock like you would a bad dog’s nose.
I thought to myself: I must be very depressed. Or maybe I wank too much over blue books. Maybe I am jaded with the blue books.
Then I shimmied my thoughts on to more productive things, like how to get the smicks to stop their rioting and get some peace in the Middle East!
And I thought if I’d the money and could commandeer some pig choppers I’d strap amps to the underside of those choppers and fly over those troublesome neighbourhoods blasting this at em: