Some are predicting that the first stages of the globalists’ decimation of America will begin as early as the end of this month (August ’09) when a report from the FDIC (Federal Deposit Insurance Corporation ("preserves and promotes public confidence in the US financial system")) will bring the chickens home to roost on the banks. A report that Harry Schultz and Bob Chapman, of International Forecaster, says will expose the real condition of America’s banks as being, in a word, fucked.

The report, due out on August 25th, will begin a wave of Bank Closures, or a prolonged Bank Holiday, which will last into late October.

Below are two letters purportedly leaked from a large Midwestern bank by someone at executive level which details the restrictions to be put on bank customers and staff:

"1. All account access was to be limited by the Bank and that any withdrawals, checks, debit cards, or access of credit lines, and IRA's could total no more than $500.00 per one or a combination of accounts every 7 business days until these limitations were lifted by Federal Authorities.

2. All lock boxes were to be sealed and access to contents disallowed by regulations imposed by Executive Order, the IRS, FDIC, and the Federal Reserve Bank until further notice."

All this tied in with the emerging flu pandemic/rush to vaccinate will serve as a good launching pad to impose martial law on America. Already it has been confirmed that Northcom troops are to be used in the mass vaccination programmes. Anyone refusing to take the vaccine can be shipped off to quarantine camps under the Medical Emergency Powers Act. With both these emergencies dovetailing America in the next few months is a powder keg waiting to blow!

Below – An eerily prescient cartoon from the Chicago Tribune c.1934 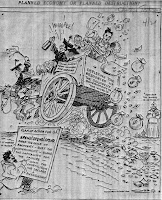