I'd Like To Take A Pig Out Here,,,And Shoot Em In Their Muthafuckin Face 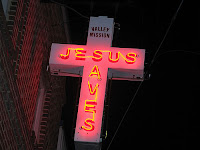 Today I decided to go out and do a bit of graffiti-ing, something I haven’t done in yonks. I came across a church on the lower Lisburn Road with a big sign planted out the front which read ‘JESUS SAVES’, so with my permanent marker I wrote underneath ‘BY BEING A TIGHT STINGY CUNT’....when the pigs pulled up on the curb and wound down the window –
- Here son, what do you think you’re doin?
- Expressing myself, I replied with dilettante flippancy.
- Well express yourself to us by explaining yourself. Come here... – The pig stuck his trotter in the air and beckoned me hence with a come hither motion.
- Now tell me, he said. What is the meaning of this. He squinted and read what I’d written. – Funny guy are you? He said.
- Some might say so, I replied.
- I wouldn’t. Graffiti’s one thing. But you’ve grafitti’d in the grounds of a church.
- So what? I retorted. Is this a theocracy we’re living in? I asked him rhetorically. – No don’t bother answering that. You’re bound to be completely at a loss to know what any word over two syllables means. I hear a prerequisite for being a pig these days is to have an IQ under 100. Away and fuck the church –
- What’d you say, you little scumbag?
- I said, ‘Fuck The Church!’ The church has caused more harm and heartache in this country alone than Jesus ever meant for. The Bible, a blueprint for love, has been perverted by man and it is that perversion which has been hardwired into 21st century apes like you. So...Fuck The Church –
- You say that again and I’ll take you in!
- Ok, pig. I’ll go one better on you. Jesus was a cunt. A tight, stingy cunt. That’s why it says everywhere: Jesus Saves ---- The holymen want us to save alright. Save all our money so we can donate it to the church every Sunday for their missionary work (read prostitute kitty).
With that the oinkster got out of his squad car, grabbed me, 180’ed me onto the tarmac, and shoved my face into the dirt. He stuck some cuffs on me and hauled me up, then for good measure (when I told him I hoped all his kids died from cancer of the stomach) shoved me back down, head first into the dirt again and stuck his knee in the small of my back. After he threw me into the backseat I proceeded to shimmy my Wranglers down to my ankles and shite myself. I followed this by pissing myself, and, for the third course, I managed to get my the fingers (being handcuffed and all) down the back of my throat to make myself sick. I boked all over the head of the female pig (the sow) sitting in front of me and left their swine mobile in a right stunk up state.

In the station the desk pig taking my details recognised me from the time I was in a year ago for possession.
- Danny Pongo? This is turning into a habit for you, son.
Right, just a few questions: Suffer from depression, suicidal feelings etc.
- Not till today I didn’t.
- Ok, the greying fat bastard said turning to the arresting officer.
- What’re you charging him with?
- Vandalism and resisting arrest, said the arresting pig, with satisfaction.
- I told him I thought Jesus was a cunt.
The desk pig curled his big red life-raft-fat lips and blew out.
- Officer Stevenson here’s a Free Presbo.
- That’s right, said the aura free pig Stevenson. (The knock on my head I took when he shoved my face in the dirt had rendered my seeing to be hallucinatory – which lasted intermittently, for the totality of half an hour , in which time I witnessed most of the pigs as having either no or very dark aura’s – among other demonic entities which swirled around their person.)
- Well, I said, let me educate you fine upholders of the law. We do not live in a theocracy. A theocracy is a country ruled by religious laws. You cannot charge me with blaspheming.
The two pigs turned their snouts and faced each other. A look of irritation passed over desk pig’s face, while Stevenson’s face smoothed with a look of lustful sadistic imaginings. Then a verse begun itself in my head and I said it, as if I too were possessed of their dark emotions:
- Gentle Jesus/ Meek and Mild/ The PTA have declared he’s a paedophile//
Like the clock on a ticking time bomb hitting zero, Stevenson’s body exploded with religious kinetic-ism and he roughly grabbed me and frogmarched me down the hall and shoved me into an empty cell with a rubber mattress on the floor. Shoeless (so I didn’t hang myself with my shoelaces) I lay back and composed my thoughts. 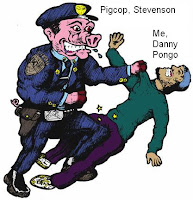 In the cell next to me some mongo said with monotone loudness:
- God isn’t coming back today. He’s too busy. He won’t be back here for weeks.
I closed my eyes and ruminated on this and considered it a good opening line to a poem or something. I replied:
- I hope he stays away. There’s always an atmosphere when He’s around.
- You’re right, came the voice.

I knew I was right. And I knew I always had a problem with authority. I lay back on the mattress and thought about another run in with an authority of a much greater scope I’ve recently encountered – that of Rupert Murdoch, in a roundabout way.....