I Am Glad Of The Orientals 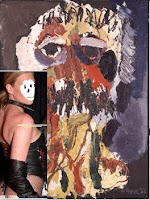 Today I received a letter on browned notepaper (like it’d been put in the oven) saying:

Meet me in The Ulster Museum. U’ll find me at the Karel Appel ‘Portrait Of Cesar’.

That afternoon a fortnight ago in ‘Spoons she turned to me outside, before we went our separate ways, and adjusting her gorgeous black leather bondage gear (which she wears out and even to her job as a class assistant in a school for special children), said, ‘You’ll hear from me when the time’s right. Not before. When it is you’ll know. A sign you receive will mark the occasion.’ With this she closed one eye and looked up into the sky. She stuck her tongue out the side of her mouth like she were trying to hook a stray bit of grub off her face and she said: ‘Invest in copper.’

So today, on boarding the bus on my way to meet the mad bitch and pulling a five from my Wranglers and handing it to the driver, I am struck surreal to notice something dangling from the much crinkled old note. A headtype such as mine, given to embarrassment in the most unembarrassing of circumstances (but not these), instantly thought it were a mini tumble weed of Kimba’s pubic hair, which have a way of collecting in the pockets of my favourite Wranglers. I have put this down to her keeping her bush like Phil Spector’s afro and insisting I plat it once in a while, result being her pubes getting tapped under my very long nails which are then transferred to my pocket.

The driver examined the note. He brought it so close to his face I was sure he could smell it. I was glad he wore deep reflective ‘Maverick’ shades, as the look of a cynical and forensic scrutinising in his eyes would have sent me batty. This driver was very interested in this note and I, noticing his trance like distraction, also took myself to lean in close and notice two little copper staples hanging from the note, which I also noticed was ripped slightly, with it looking like the staples had at one time held it together. ‘Invest in copper,’ was the last thing Mistress said, and it looked like someone had in order to keep their legal tender presentable looking and in one piece.

When the driver resigned himself to a studied and at the same time confused acceptance of the state of this five I bought from him a day-ticket and went to sit on the top deck. I was the only one up there, a good thing, an all too rare privilege, as, for example, you can perv on a girl walking along down on the street, see her from the front then turn your head right round to see her from the back without anyone up there with you to notice what a pervy cunt you are. Or another thing you can do only when there’s no one about, which I enjoy, is blowing old men kisses from the top deck. They get tourettes mad and start shaking their fists and yelling curses. One oul boy, when I really went the whole hog, puckering my lips, fluttering my lashes etc, turned white and grabbed a fistful of his jumper and fell over into the road. The cars all breaked and skidded and a crowd gathered round him. As the bus pulled out round the crowd he pointed up at me and everybody turned with a look of confusion, as if to say: What a mad old liar!

The other thing I mostly do when riding on the top deck of a double-decker is to wave at Orientals. This is something you can do even when there’s other people around as it is a perfectly innocent activity. Plus the Orientals, without fail, always wave back, a thing that fills my heart with opium poppies and for the longest couple of seconds, things that trouble me, like today going to meet Mistress, fade away into the never, ever, could’nt’ve ever been conceived of and it is for this that I am glad of the Orientals. 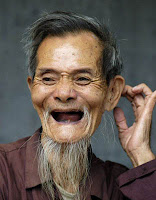