I got off the bus at QUB, with the driver muttering hateful nouns under his breath. I wagged my finger at him and he accelerated through a puddle, soaking me, the cunt. I proceeded toward the medium difficulty hill of the depressing Stranmillis, with its tree lined meandering ennui, which put me in mind of Nirvana’s Scentless Apprentice, which I put on my I-pod, and which psyched me up for my meeting with Mistress.

I found her where she said she’d be, standing at that ugly painting of Cesar. 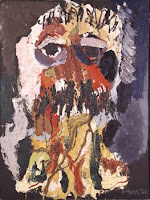 I never picked up on it before from our meeting in ‘Spoons, but her voice sounded the way white spirits smells. Her voice sounded like her words were put through a wood chipper coming out.
- The time’s right now, Danny Pongo. Kimba’s into her third semester. I got a bunch of fellas together, one guy has a camera. I’m gonna ritualise this – you know?
- No –
- I’m not going to harm your babies –
- I wish you would. I don’t want them –
- But in order to sell this material you have to participate in some activity –
- Like?
- Like imbibing the menstrual blood Kimba passes in the course of her labour.
- Drink it? Fuck aff!! No chance.
- And eat the placenta. Tom Cruise did it.
- I don’t care. He’s a freak. What’ll this shite sell for?
- Thousands. You’re guaranteed 5k between you and Kimba.
- Nice 1.
- There’ll be dogs involved, too. Kimba might have to be sodomised by one as she’s giving birth. Plus it is part of the ritual that animals (dogs preferably) will defecate on the newborns as they emerge.
- Ok. But I drink the blood, right?
- Yes.
- When Kimba was with you did she ever get tested for HIV or anything like that.
- Not that I’m aware. You’ll have to ask her. While you’re at it you can tell her all about my plans.
- She’ll flip her lid.
- One of the guy’s that’s coming along is on a methadone programme. We’ll slip her that. If she’s in labour she won’t know what’s happening. She won’t remember a thing.
- What about some rohypnol?
- I’ll see, she said, taking a picture from her purse. This is sort of what everything’ll be laid out like. 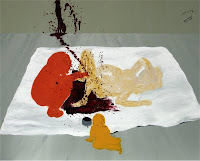 When I looked up from the weird sketch Mistress had wandered off in the direction of other paintings, the slow languorous click of her thigh high leather boots with the 2.5 inch stilettos echoing off the bland white walls and the old boring paintings as she slowly looked this way and that and at all the other visitors not deciding what direction to go in and absorbing all like the psychic vampire she is.

I had to stop of for a large brandy before I went home to calm my nerves and think things over.

When I got back I found these four wee girls and their older sisters congregated around the wall at my front. One of the girls had a dolls pram with a cat inside that she’d dressed in a bonnet and romper suit. The thing was in some distress as the odd little bitch had restricted its movements with the aid of a complicated series of shoelaces tied round it and knotted on the undercarriage of the pram. The girl was talking to it in baby talk. She looked around 8 or 9 and I put it all down to her being simple. On the way past the older ones I heard one of them say, ‘My ma told me usin’ tampons makes you lose your virginity, so I use the pads.’ To which the other one went, ‘My brother calls my tampons “my blood sticks”. Dirty wee fucker – I fuckin’ slap the taste outae his mouth when he came off with that one.”
Posted by Danny at 01:07