Takin' A Dive Cos You Can't Halt The Slide

Half way up the stairs in my building going up to my place Mad Otis hails me from behind and I turn to see him standing at his door wearing a leopard print Tarzan g-string and an oiled chest, fading and ran out in diarrhoea-brown streaks over his six-pack.
- I’m movin’, he said with great jubilation.
- Nice one, Mad Otis, I said feigning sincerity.
- I’m fuckin’ wapped out. ‘Mon in for a wee swallie!

As is the course with Mad Otis I complied and went with him into his poofter-clean flat, which appeared to have been spruced up to an even greater degree since I’d last been in. On his nice Parker Knowles sofa sat the fat barrel shaped cunt that wanted to suck a fart outta my hole the last time I was here. Mad Otis brought me a shot of Sambuca and racked up a coupla lines of coke on his little granny-vintage vanity mirror.
- My wee cous’, Shanky’s doin’ a flat swap wif me – he’s just outta Maghaberry there, done a stretch for armed robbery, thing is he ripped off the Mace in his estate so he’s been more or less ostracised there and he needs a new start. Suits me, cos his place is up on the fourth floor, no more livin on the ground floor for me with those wee cunts kickin ball of my windies mornin noon and night, and it suits him cos he was told if he didn’t get out they’ burn him out and call him a fuckin nance into the bargain!!!
- That’s no good. Being labelled a paedo’s worse than bein burned out or gettin’ your knees done. You know what the provo’s used to do to nonces in the 70’s? Used to drop them into pits with starvin’ Rottweilers and the Rottweilers would eat them alive!
- Fuckin; hell! --- Well anyway, mate I’m havin a wee celebration here. Let’s nat talk about fuckin nances or things like that. So happens that when my life takes a turn for the batter I get motivated to make things work for me. Get wee notions like startin up a business or inventing a cure for a disease or a sexual dysfunction.
- Work on the sexual dysfunction. You don’t want to be curing diseases and making people live longer. World’s already got too many people. You need people to drop off in large quantities, regularly. Work on the sexual dysfunction shit.
- But surely if I’m to cure peoples sexual dysfunctions they’ll be fuckin more often leading to more babies and more people on the world. But I’m with you on the ‘too many people’ problem. Advocate of Kissinger’s depopulation agenda myself. 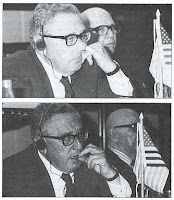 - Really, Mad Otis? Touché, by the way on the sexual dysfunction path...
- So this time I’ve come up with a fuckin weeker wee scondal! I’m gonna sell stillborns to paedophiles! Shanky’s circumstances gimmie the idea, him bein burnt outta his estate for bein called a nance an’ all. 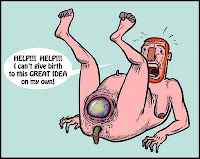 - I get that. And I might be able to help you out if you gimmie a couple of weeks. This is what you call synchronicity, Mad Otis.
- What’s dat?
- It’s when a coincidence comes together, but with emotion. Like when Cecile B DeMille or whatever said: ‘Once more with feeling,’ that’s what you’re basically sayin to whatever demonic entities control coincidence.
- Right. And I think I’m gonna be doin a great public service generally, cos if nances are bummin’ stillborns then they’re not bummin’ real life kids and commitin’ the crime of child abuse – meaning a win-win for all...!
- Right! I’d never thought of it like that.
- I’m gonna go roun’ to the Go-For-It scheme the mara see if I can’t get a grant of off em.
- Watch out though they might think you’re into some mad shit Mad Otis, and they might get you put away like your cous’.
- They won’t fockin’ touch me. Danny Pongo, this is my time – No fuckin bullet can hit me. No fuckin explosion will graze me. I am indestructible. I am goin to rule the fuckin Belfast. Me. Fuckin Mad Otis.

He got up then and put ELO on his turntable. He danced round the room with his hands in the air doing this wee twisty movement with his hands like he were unscrewing a light bulb. His left bollock fell out of his Tarzan g-string and I was surprised that it was totally hairless, it hanging there: his bald left bollocks, bald as a newborn baby’s bap bobbing away like a convulsing hairless spastic but Mad Otis didn’t care – dancing as he was.