There Once Was A Poodle Who Thought He Was A Cowboy...

I do so fucking hate getting a wash. It was though, unfortunately, a complete necessity today as after getting my haircut a load of wee jaggies had gone down my back causing a frantic blur of itching on the bus on the way home. To others on the bus (delivering odd and morbidly enquiring looks) it must’ve looked like I were suffering from some sort of mental illness that manifested in extreme histrionics mostly. 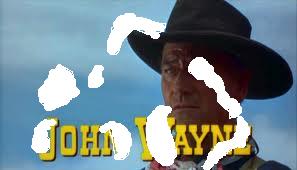 So I was glad to get back into the house, and once settled the jaggies didn’t cause half as much annoyance as when I was out, walking around. So I procrastinated and procrastinated for two and half hours altogether. I watched The Searchers twice and had a wank over John Wayne, something I always end up doing when I watch one of his flicks two times in a row.
Then after smoking my 7th rollie and loudly sighing at my lack of brainpower in conjuring another diversion to keep me from the bath, I roused myself to get up when my telephone rings.
It was my mother.
-         It is your mother calling, - she says with her clipped accent.
-         I know it is. Your name came up. I have you listed as ‘mum’.
-         Comfortable. Good. Well, I need you to come round. I broke my hand trying to swat a fly.
-         How in the name of fuck did you do that?
-         Not my whole hand, mind you, just my pointing finger and my fingering finger –
-         Ah! No! Don’t…! Don’t use rhetoric like that with me!
-         Why not? Its natural.
-         No it is not! Not natural. Talking to me, using those descriptions, it’s akin to incest!
-         Ahh! Get away to hell!
-         Tell me, how’d you do that trying to swat a fly?
-         I was chasing the thing round the kitchen all afternoon when it landed on your cousin Donatello’s face, forehead to be precise about it, as he sat on the floor doing a Thunderbirds jigsaw. And I smacked it flat as a pancake with the palm of my hand. But poor Donatello thought I was giving him a smack for no good reason, and grabbed my fingers and squeezed till he broke them. Strong as oxen are those ones with Down’s Syndrome.
-         Yes, - I went.
-         But that’s not all. Donatello went screaming out of the house like a Loony Toon with a mashed up fly all over his bake. So I’ve sent your sister Micheesha and Stupid Peter out to find him. I want you to come over here and make my dinner for me. I can’t do nathin with two broken fingers.
-         Right.
-         And bring me some bourbon.
-         Will do.
So I went over with her bourbon and made her Birdseye burgers, which I quartered and served to her on crackers with cheese melted on. She loves this and it is all she eats.

Later we stood by the big kitchen window birdwatching. She let me drink a bourbon, too. I put this track on her cassette player to keep the mood of he moment going.