All Fucked Up, And We're All In It Together

This last couple of weeks I all but dispensed with conventional time-telling ('all but' meaning apart from those times I left the house and couldn't help seeing the big public clock near to where I live). Instead, as a means of telling the time while indoors, I relied solely upon the order my favourite programmes appeared on the television and planned my day and mealtimes around these.
For e.g:
9:45am – 10:30am – The Jeremy Kyle Show 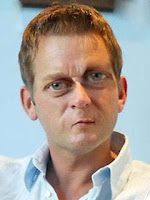 The Jeremy Kyle Show served as my wake-up call in the morning. Party Time, with his supposed bomb making skills, was able to wire the TV set up so that it would come on at a designated time, just like an alarm clock. I would woke up every morning to that sponsor's great theme tune:

This woman walks along the edge of a swimming pool pregnant with an enormous bingo ball, big as Moby Dick's eyeball, holding her belly and swooning. In the pool loads of other mothers' Bingo Ball Children are bobbing away contentedly. Said expectant mother suddenly stops, lets out a yell, then gives birth to her own Bingo Ball Child right into the swimming pool. Amazingly there is no placenta. Then the new mother chucks herself in on top of them, probably killing a few, including her own.
What I think this is communicating to the TV Buffoon's subconscious, the underlying symbolism fashioned in shrinks' labs to latch onto the tic-tac-toe of their innerminds, is:

'All you single mothers at home, just dropped one, another already in the oven. So far gone it's starting to brown round the edges. You got better turnover than a Leeds' McDonald's at lunchtime getting them out there...Yes all you single mothers, what do your children represent to you? Bingo Balls, and you're all hoping your one's the 'Full House' or one with 3 bedrooms and central heating anyway...So You! Yes You! Kill yourselves, and take some of your Bingo Ball Children with you!'

It so happened the other morning that while having a good old laugh at the expense of Jeremy's menagerie of half-mad creatures, I get a call on the telephone from Bosco:

- Hello, you cunt, - I say, - what do you want?
- That's not a very nice way to greet a pal after all this time, Danny?! - he went with inflections.
- You still selling your base, Bosco?
Oh yes, but that's not why I'm calling, you see I read your fuckin' wee girl diary Danny, only fuckin' emo's and trendy's, and fuckin' mongo's who're told to cos they've special needs and it helps them get over it, keep fuckin' diary's, Danny!
- So what, Bosco? What you getting your gusset in a twist over?
- Well, seeing your boasting all the while about your big cock, why'nt you put it up for the world to see? Give us all a big laugh. Cos I've seen your cock, Danny, and it ain't all that!
- You fuckin' wanna bet Bosco! I'll post it online and it'll go viral faster than fuckin' diarrhea through a UN refugee camp!
- Fuck me! Think I hit a nerve...hawrhawrhawr!!! - Then Bosco's laughter petered out and was replaced by this whimpering, like a kicked dog, and I asked him what was the mater...
- It's one of those adverts, Danny. The one about the starving in Africa...and you talking about getting the skids in a refugee camp and making jokes...you fucking bastard!
- That's what you call synchronicity! What channel's it on. I Love those adverts.
- Channel 4. Cunt!

I watched the ad for a bit, and while ruminating on the synchronicitous circumstances, a feeling swooped over the landscape of my soul...and I had a brainwave which I think might one day solve All African Hunger – something that not even a million Live Aids could achieve: Why don't they eat the flies! There's fucking loads of em! 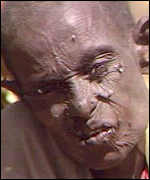 I relayed my divine revelation to Bosco..
- So what I propose is you gas the villages with something that will knock out the flies but will be harmless to the starving villagers' malnourished and depleted immunity systems. When all the flies are knocked out you get all those child-pimping UN soldiers in there to shovel them up and put them into cauldrons. Then, and it doesn't take a Jamie Oliver to solve this one: You boil all the flies up in the cauldron, to kill whatever diseases they may be carrying, add some, I don't know, palm leaves or whatever to garnish, and Bob's Your Uncle...Fanny's Your Aunt...!
- You're a sick cunt, Danny...get that cock of yours online...give the world a laugh you pathetic bastard!!!
Posted by Danny at 20:52