And We Die And We Live And We're Born Agian

I headed west last night, Black Mountain direction, to collect a 1/2oz of the nicest green that's surfaced this last bit. It has been a miserable bad run in below-par-product the last 6 months – in regards marijuana anyway, and, I have to say, speed, too.
After I got the shit My Man offered me a lift back downtown. Just as we passed the Milltown Cemetery it starts lashing it down. We come up on a sharp turn where Blackstaff Rd meets Kennedy Way, before we hit the Westwood Shopping Centre, - and in that instant just before we got round the bend there's a boom then a pop then a crunch then a short tinkling of glass on asphalt, all probably simultaneous, more or less, but heard by me distinctly, in sequence, then, completely round the bend now, we come upon the immediate aftermath of a bad accident. 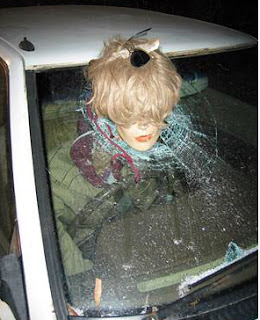 My Man, a good driver when it comes to responding to the sudden and unexpected, dropped gears and glided round the debris-heavy perimeter of the wreck, oh so slowly. A Mazda, hit at good impact, was right up on the curb and was in the shape of a banana. The other motor, a nice one, like a Beamer or a Merc, sat dead centre in the opposite lane from us and its bonnet was all mashed in, totally flattened. The woman behind the wheel had her face pressed right up against the windscreen, the curve where her temple meets her forehead providing a epicenter for a big cobweb of shattered glass.
I had smoked a good bit of the rocket My Man had passed me when I got in his car with him back up the mountain. Now, passing this road traffic accident victim, completely baked, I absorb it all and am giddy for reasons that are: 2 part fresh gladness at this good new source I have found and 1 part the pure THC – and in regards that last part, the sight of this woman, her head embedded in her shattered windscreen, her legs probably mincemeated by the engine coming through the pedal well - all this abstractly registering on her face to begin with; all while she blinks so slowly: It give me the impression she was still able, in some part of her mind, to will a delay in the onset of the massive pain that was to come any second. But if this was so, the only outward expression it left her with was one of great confusion.
She opened her mouth then, and My Man rolled his window down to hear the noise she made. It was a level, bass groan. Like a zombie.
My Man said, - Fuckin kids're gonna think this is a display for Halloween.
I asked him to drop me at St Mary's a little way up the road as I'd the heebie jeebies from the state of that woman's head. I walked the rest back into town listening to this number on my Walkman: 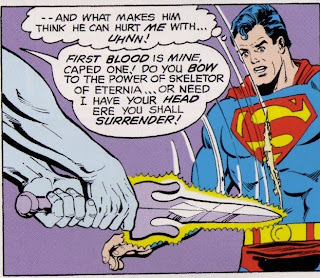 Going along Bedford Street I come up behind this trio of pencil-necked poindexters, one a redhead in a Superman getup with the foamy muscle chest top. Then this wee cunt, drunk, done up like Rambo, lurks from somewhere with a plastic (thank fuck) bowie knife and slaps the nerd up the side of the head with it then trips him. The poindexter, props to him, stayed on his feet and went on, then let himself (and witnesses rooting for him) down when he jogged on a bit put his fist in the air and made like he was going to take off while shouting something about Jor-El...Ah...and the Rambo was all:
- Fuckin state of you you wee fruit – think you look like Superman? Ah'll fuckin stick yer cape up yer hole and pull it out yer japs eye – be my fuckin Hall'een  trick you'll be – faggot...
I went home and listened to the news all night, to hear if that woman had died, and fell asleep to Sailing By in my lovely armchair.
But Belfast's shit for Halloween, generally, on the costumes front, anyway.
Posted by Danny at 12:56