Ebeneezer Goode And Me

Today my sister Micheesha telephoned. She told me she had someone with her and she wanted me to speak to them. She put this wee spidey cunt on the line then:

- So Slug doesn’t know what to do with ‘em. Asked me if I’d sell ‘em for him. Was wonderin’ if you wanted some thrown your way for you and your weirdo mates.
- Sure, - I said, before hanging up.

So Micheesha is coming over tomorrow with some e’s. Some for me that I’ll take, and some I’ll sell to my pals. Was never really big on e’s. I mean I took them weekends, nearly every weekend for 6 months, but I wouldn’t go mad like some of the ones I know, like Bogdan or Sweeney, who used to bang up to 15 a night. My limit was 3, then the cotton mouth started to worry me and I’d get it into my head that I’d had one of those mini-strokes. I’d go home then and put on this tune (every time)

and smoke a rocket 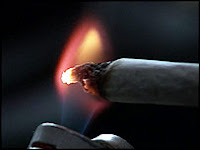 so as to put the buffers on the come down – prevent breaking up on re-entry. The beginning of the end was one night when my arms began to disappear. They just disappeared into thin air, like a cloaking device had been activated. Cloaking device would be more accurate as a matter of fact. Because my arms didn’t really disappear – become totally invisible. More they went like the Predator and blended into the background. I remember holding both my hands out in front of me and being able to make out the pavement below through this swirly outline of both my forearms, rainbowing madly like a soapsud slick. The end – the final time I took an e in that long regular cycle - came a few weeks later in The Network.

It was a club on North Street that stayed open to 6am. You couldn’t get any drink but there was always a U.D.Ah’er (or Womble, depending) standing in the shadows somewhere who’d be slinging e’s like a Burberry clad Pez dispenser with an inf

inite supply. The night in question I was sold a coupla duds and as soon as I felt that rush when they hit the system I immediately thereafter felt a strange hollow sensation like I’d been drained of all but my basic instincts, not in the Sharon

Stone/Michael Douglas way, but like all I was capable of doing was breathing and walking. I left early, getting in a taxi with no plates. The driver wasn’t all there. I asked him to go to the Donegal Road and he ended up taking me on a mystery tour up round Black’s Mountain and all over North Belfast. When I got back he charged me 20quid and made me buy a sachet of ‘Liquid Viagra’ off him for 15quid. He had a lucrative night, the big dangly lipped retard that he was.

And that was that with me and e’s. Course I have indulged the odd night between then and now and I think with this batch I’m gonna have myself a good time too, (and make myself some coin as well!)