When I was on the phone with mother this afternoon she said something that made me think she had entered the menopause, - or the drying of the lake bed, as she likes to call it. She tells me that she is crying all the time at piddling, daft things. The other day she told me she started crying at a part in Home and Away. Seeing this is the only soap I don’t watch I didn’t know who the characters were she was talking about so I couldn’t empathise. She told me that the other day walking round the supermarket she burst into tears again --- I was walking past all these people and I’d look at an auld doll sizing up her tomatoes or a young family and I thought to myself imagine if there was someone at the door who arbitrarily told people they had no right to enter. – - And that made you cry? – I asked. – Yes – she sobs thinking about it again – it made me cry.

Yesterday morning when Aloysius was halfway through his story I flicked onto the news and saw the price of gold had gone through the roof. I thought about this for a bit then cursed my hesitance when, 9 months ago, I received a telepathic communiqué from Rueben that the economy was going to majorly hit the skids and to buy gold. -–- Paper money will be worthless once again and just like in Germany after WW1 people will be using it to clean their hole and paper their walls. 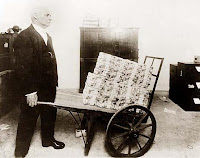 I didn’t think it would get that bad so didn’t bother following up on the gold tip. Now, like I say I am kicking myself. But, then like a bolt from beyond I recalled a story in the local press from a year or 2 ago that concerned gold that was deep in some caves just over the boarder. 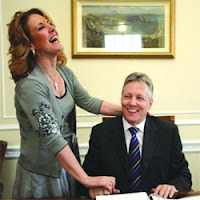 If memory serves there were some maneuvers by the devil eyed Peter Robinson to try and claim the territory was part of Northern Ireland and claim the gold for himself. I can imagine the scene. Him and Iris,

Anyway, I got to thinking ‘its one thing owning gold stock – but real physical gold. You’d be the richest man on the street at least. Then I remembered the afternoon I spent drinking with the da (I’ll call him Donny) of Mad Otis downstairs. He had told me he had panned for gold in Norway (as well as being in the French Foreign Legion and a mercenary manning the diamond mines in Africa). I didn’t believe him, but then a week later when he was back up for another drink he produced pictures of him out in the Norwegian wilderness, shotgun at his side panning for gold. Others showed him outside a Norwegian café and another showed a young girl or indeterminate age standing against a bare wall wearing only her bra. That night he told me he used dynamite one time in a cavern in Norway. He was told by the locals not to as it would raise the ire of the local elves. He did it anyway and found no gold but did manage to break his collarbone before leaving town which he put down to those elves.

Donny’s dynamite story got the gears turning in my head. If he had some dynamite expertise then maybe me and him could get a team together to excavate the gold ourselves. To hell with Paisley, Robinson and the rest. I imagined us hauling ounce upon ounce of gold out of the depths saw myself 6months later descending some windy mountain road, wind in my hair, listening to this song booming from the stereo system of my gold car (that could also turn into an eagle if I wanted it to).

I also like to think of this song as the opening theme to a 9/11 centered soap opera. Just listen to the strings at the start and superimpose an image of the planes smashing into the towers.