Beyond The Blue Horizon

The story Aloysius told me was yawning in its scope, like an impressive canyon, and contained features I wouldn’t believe even if the talking clock was telling me it. When he was flown out of Ards in a ‘military helicopter’ he didn’t get more than 10 feet clear of the North Down Coast when a big burley shovel like hand went tight over his mouth from behind and he fell into a deep white chloroform sleep. When he awoke with a sore head he found himself in a massive aircraft hanger where a chrome jeep sat dead and centre of the place, accompanied by what he said looked like 4 Saharan Tribesmen standing by the vehicle.

- they motioned me to come forward. Well the one at the front did anyway, they stood in a diamond formation like they meant to and he was the one standing closest to me. So like I am at the mercy of some sort of telekinetic tractor beam I am drawn toward this quartet and they usher me into the back of their very reflective chrome jeep. The jeep is more than just a flawless chrome sorta colour its like it can blend into the background – like its got a cloaking device – like if 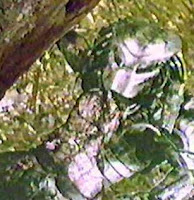 The Predator were put in charge of Ford Motors that’s the sorta car that’d come off the production line! --- We drive for miles and I sleep some of it. I don’t know what country I am in but the journey is long and I wake up and fall back to sleep again often. When I wake, every time the scene is different. Sometimes it is raining, typhoon style, other times the sun is splitting the trees. Sometimes we are in the desert,

sometimes the countryside, other times we are in the grandest cities; and these times, lying across the back seat of the jeep staring up between the buildings so tall they surely converge somewhere out there beyond the filament’s blue horizon I thought of you and thought ‘Don’t tell me parallel lines can’t converge, Danny Pongo!’ (cos that’s my name).

And those and more specific details I availed of gratefully yesterday afternoon in the Morning Star in order to colour a canvas drunk into existence so to block out the scrawny figure of Kimba sitting there, who I think was starting to entertain the notion I could be her non-lesbian boyfriend. Knowing Aloysius as I knew him though, this was only the prologue.