Trying To Make A Pound Out Of 15p


When I arrived home I could’ve nearly cried when I realised that change I dropped at the foot of the Moses’ tramp was all that was between me and the grave, save for bad fortune.

I raided my cupboards looking for something I could throw together for my dinner, but all I could finds, behind an empty box of Weetabix, was a half-a-tube of Jaffa Cakes. I forlornly returned to my living room and sat eating them and watching the news on the tele while trying to feed little corners to Boke the Cat, who turned his nose up at them.

Well then the little cunt could starve. And this situation just wouldn’t do.

So I had to make a pound out of 15p, as a variation on the song, and in order to get this done I went cap in hand to Bosco’s to buy some of his base.

- Danny Pongo, with his tail between his legs. Never thought I’d see the day, - said Bosco, laughing at me.
- Have the cops been here looking for me, Bosco? I asked.
- No. But don’t think I’ll be lying for you when they do show up. I’ll have you on possession with intent to supply if you tell them about me making it up here. Consider it the touts’ M.A.D, or Mutually Assured Destruction.
- I know what M.A.D means, Bosco, - wishing I could do a bit of mutually assured destruction on his hole, then by effect mine, but only so it meant fucking the little cunt up.
- How much you want?
- an ounce.
- on strap?
- yes. Gonna sell it with a 5er mark-up on a 10ers worth. Gotta get some coin together.
- I hear ye, - said the little weasel, casting himself in his own little hard-luck story.

I reckoned My Sis’ Micheesha would take most of it off my hands and the rest I’d sell on in little wraps here and there.

Micheesha’s house as usual was a fucking tip. Dogs’ shit in various sizes, shapes and colours sat like islands amidst a sea of kids’ toys. There was not an inch of carpet you could see.
- Micheesha, fuckin dogs’ shite’ll make your kids go blind if they touch it, - I warned.
- I’m getting a woman in to clean the day, Danny, fuckin’ drap it! What you wan’ anyway?
- Need to shift a bit of base. You interested?
- aye. Show us... 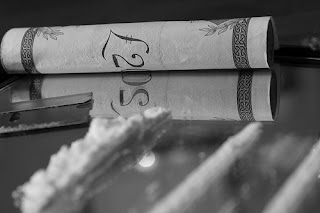 Micheesha’s a very thorough and particular little bitch and has not a crumb of trust for me, Danny Pongo, her little brother. So we racked up a couple of lines me and her so she could test it, and for the following hour and a half I’d to sit and listen to her list a number of grievances she held against every one of her exes, (not a modest number, men and women): the beatings, the rough anals, the thieving, the drug addicts, the alcos, - a compiling of miseries heaped upon miseries reamed off with an autistic’s fastidious attention to memory and a poet’s vividness, all her own terrible memorial from then till now.

After I got fed up with her talking I made my excuses and left, and she hit me with it at the door.
- I’ll get that sold this week. You hold out till then till I get you the dough?
- fuckin’ hell, Micheesha! No! I’m flat broke. Gimmie a score, and I’ll be back for the rest on Wednesday.
- don’t have a fuckin’ score, Danny!
- oh yeah? Well what were you gonna pay the fuckin’ cleaner with then? – I said, snatching her bag of the hall table.
- gimme that back you dirty wee cunt, - she said chasing me down her front path as I turned her purse over in the garden.
- there we go. 20 quid, - I said taking it from the pile of paper and coins. See you Wednesday.
- what am I gonna pay the cleaner with?! Danny? Danny! – she yelled as I walked away.
Posted by Danny at 17:16

Labels: 2Pac I Get Around, Boke The Cat, Bosco, Bosco's Base, Jaffa Cakes, My Sis' Micheesha, On Strap, Speed, Weeabix