Forgive Everybody And Remember

I ran out of all my money today at the same time I realised my motor had been sitting up there in that multi-storey car park in town for so many weeks (two), probably encased in ice and snow like some modern art resemblance and now it would probably never start again.

So I yet again returned to Micheesha’s looking my money. And if she didn’t have it, the slippery little poisoned eel, I would wreak a vengeance.

I had to go into town to get a bus to her’s. On the way to the bus I nearly went on my hoop twice on real slippery shiny patches of ice, - made so slippery thus dangerous by the fact they were the result of leaking gutters from the buildings all around, dripping all manner of shite and sewerage down onto the footpath to collect in big pools to then freeze in the -10 climate today. 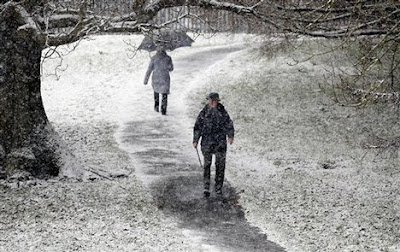 3 old women went down like they’d been shot by Nazi sharpshooters on D-Day. Straight onto their backs. The first two were attended to quickly and graciously by passersby. And in those cases I would’ve done my bit there if it were required. The last old doll I saw falling though, she cracked her head on a jutting out brick from a building. Cracked her head like an Easter Egg and blood poured out everywhere and I being so mortified couldn’t even make believe it were syrup pouring out of like a Cadbury’s Crème Egg (and it were red instead of white anyway).

So I crossed the street and turned the corner, and was glad to find the bus to Micheesha’s was just about to take off. I was glad because if I’d’ve stopped to help the old doll I would’ve missed it. So it was a good thing I ignored her and a sort of inverted evil fate that allowed me to continue my mission.

Again at Micheesha’s the bitch stands there, shoulders flexed. Entry blocked, shoulders deep, upper half bouncing slowly from side to side off either side of the doorframe like a speedometer in flux.
- where’s my money, cunt.
- I don’t have it. I only have what I have. And you can’t take it off me! It’s Christmas!
- I’m gettin my fuckin dough today. I’ve no food for me nor the cat. I can’t get my motor outta the fuckin multi-storey in town. I’m fucked Micheesha.
- dunno how you’re fucked, Danny, cos I’m nat givin em out mate. As in I don’t give a fuck. Nat one. And I saw you comin’ up the path and I called Stupid Peter (her ‘partner’) and his brothers. So I suppose in that case you are fucked, Danny. And you will be by them! 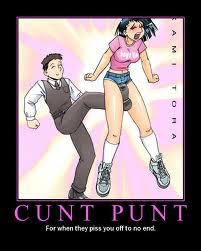 In response to this sisterly petulance I kicked her right in the hoof (the vagina) and went booting into her house. Before I could get to the living room she grabbed my ankle (she were on the floor winded at this point) and pulled at my trouser leg imploringly.
- Please, Danny. What are you doing? – she wheezed. - Please don’t. Think of the kids! Here, - she wheezed some more while getting to her feet and handing me a tub of green face paint. – rub this on your face and put this woolly hat on and your eyes are all glassy and red so that’s good and go in there and tell em you’re The Grinch and you’re here to steal their prezzies cos I know that’s what you’re going to do ain’t it? but more than that: you wanna keep the FANTASY of Christmas alive for em Danny, don’t ye?
- I’m gonna steal em and sell em, yeah. Cos I gotta you silly bitch. But yeh to the other thing, too.
- right then, - she whispered, forlornly.

So I went in there and stamped all over the toys and dogshit and scared the kids half-to-death. 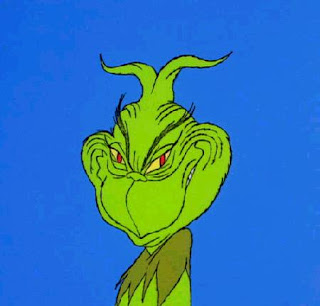 - I’m The Grinch, yahh, - I went.
They squealed.
- I’m The Grinch, yahh! Yahh! And I’ve come to take all your prezzies from under the tree cos you’re good-for-nothing mother ain’t paid her drug debts so now she can’t pay Santa for your toys. So I’m the Grinch and I gotta take them.
- No! – they screamed. – No! Please Don’t!

But I did and that’s all there was to it.

And later at home after another nice warm & tingly act of onanism it finally dawned on me that always, without fail, after I pull one out, I like to listen to a good tune. So I thought I’d create a Facebook page called ‘wank:tune’ then realised I couldn’t cos I don’t have an account.

Happy x-mas to one and all! 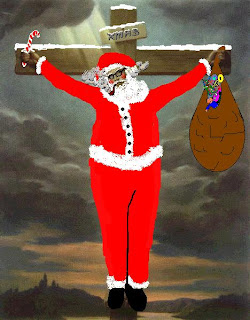 And here’s that tune I heard, one of empowerment and defiance, my gift from me to you: