Scientologists Tried To Steal My Hat With Their Wind

I see the Scientology Mengeles have put up a banner ad over there. So in order to balance out the ‘info war’ I will post here a picture of a victim of Scientologist dogma – that is, withholding from the sick in mind and/or body ‘evil’ pharmaceutical drugs.

This poor unfortunate here was Lisa McPherson. She was 32 at the time of her sad death. She was underweight and severely dehydrated when she was found. Her body was covered in bruises and bug bites. How this state of affairs came to be was that some time earlier, a week or two before, she was involved in a car accident, which she walked away from with minor injuries. But she did however proceed to go batty, stripping off all her clothes and dancing around. The doctors at the hospital she was brought to said there was nothing wrong physically as a result of the crash, but that she’d need to be psychologically reviewed. This is where her handlers from the Church of Scientology, of which she was a member, stepped in. As their religion didn’t believe in psychiatry they were going to take care of her themselves. They took her to a hotel (that they owned) and kept her in solitary for ‘Introspection Rundown’. Leading her to deteriorate into the sorry state seen and described above. 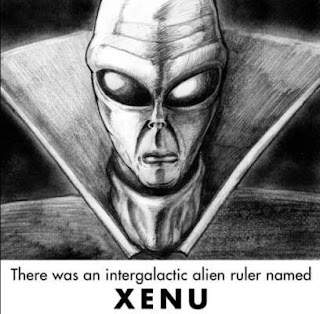 I think to myself, with a little shudder, how the lure of Scientology with its talk of aliens and galactic war would have been something that might’ve had an impression on my young/teenage mind, captivated as it was by tales of alien races living under Denver Airport and secret gov./et deals. I am glad the boggle-eyed freaks hadn’t set up shop in Belfast, like they have now on Gt. Victoria Street, when I was 13-16. 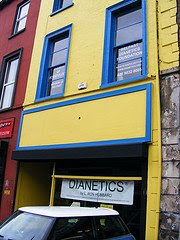 My pal Bosco, a cobbler, took a great interest in investigating their operation in Belfast after he saw this Tom Cruise video.

I told him I wasn’t afraid of them and that we should just walk in there some afternoon and ask to take one of their personality tests. He told me I was:- incorrect if I thought we could just waltz in there like a pair whose arse don’t touch the seat. They are dangerous and ruthless and above all well funded. We will have to think of a greater ruse if we are to infiltrate and really reach the belly of the beast re The Scientologists --- this is the way he talks.

So we decided on doing a little standoffish reconnaissance. One afternoon, when heavy rain was forecast, we marched across the Albert Bridge toward Gt. Victoria Street. I had that Jerry Fielding score from the big shootout finale at the end of The Wild Bunch in my head. I felt like William Holden.

We reached the top end of Gt. Victoria Street where their Headquarters is. We stood across the street from it hanging back on the forecourt of the old disused BP. Bosco had a novelty Spiderman telescope his cousin got off the front of a comic and give to him for the mission. At that range it wasn’t too bad. We could see clearly through the first floor window above that old record store (?) that used to be there. It looked like there wasn’t too much activity so we went to cross the road when a gust of wind flew by tearing my lucky baseball cap from my head. I call it lucky cos when I have it on playing online poker I win as much as I lose. When I don’t wear it I can’t get a single good hand. So I blindly dashed into the middle of the road after it and retrieved it from the white line where it had rolled to. I narrowly avoided being hit by a Virgin TV van and when I returned safely to the pavement I tripped and cut my hand. When I gathered myself and more firmly attached lucky cap to my head Bosco nodded in the direction of the window. Standing there was a very plain looking nerd sporting a bowl haircut with ambitions to be bouffant. I feel, even now (this happened 2 months ago) that this geek had exercised some degree of telekinesis upon me – tossing my hat off my head. That or the Scientologists have weather control technology causing the wind.

So far we have no future plan of action. I might suggest to Bosco that we masquerade as aliens from that sci-fi novel they’ve got out. But that would come with the risk of them thinking you were the real deal and assigning to you buckets of responsibility.

But there is a tale of madness beyond their weirdo mantle. A journalist I know tells me that when you roll past that place late at night and they’re having their meetings, all the cars outside are Mercs and Jags etc. its his feeling they’re the New Freemasons. I’ve heard the first thing they do when they set up in a new town is flatter the local police force. They organise nice big banquets for all the bigwig rozzers and generally work on currying favour with the cops. Then when some youngster stands outside one of their more fancy buildings they’ve got in London holding up a placard saying Scientology is a cult the cops swoop in and sweep him up – telling him what he’s doing is illegal. There’s a report about it somewhere but I can’t be fucked finding it. I know one thing though, they’re not to be fucked with, the Scientologists.
Posted by Danny at 01:25