Go Away Jesus - A Castrato Stole Your Crown

News from Reuben is that Roseanne Barr

is claiming on her blog that Joe Jackson

was an MK Ultra operative.

Here is what she says:

joe jackson is an mk ultra operative
who's abuse of his own children was used to profit the CIA's programs that follow and study the effects of child abuse on the young, and how their minds can be controlled to such an extent, and with such abuse, that they can be forced to develop talent. jesus said 'the truth will confound you in that day'.
joe jackson is a child abuser, and catherine looked the other way while he beat their kids and tortured michael mentally. keep them both away from michael's kids.

The half-mainstream Capitol Hill Blue now says that Jackson might have been castrated. I mentioned this in Fact #2 a couple of weeks ago.

I read in the paper today that one news commentator covering his rinzzle tinsel memorial service said ‘he was very much alive until he died.’ Or words to that effect.

Then there’s Ireland, thinking of introducing blasphemy laws. The Bunreacht na hEireann (Irish Constitution) says that with any change to the law there has to be a referendum. And surely voters will see the folly of trying to outlaw that ever-present instinctual verbal response when met with something a little out of the ordinary. I would be having flashbacks to when my granny would scold me for taking Jesus’ name in vain. Will this be considered worthy of prosecution? Hitting your thumb with a hammer or hearing on the death of a distant relative and feigning sadness: ‘Oh God...’ How will they police it? There is a hefty fine of 25,000 euro for anyone ‘causing a motivated group to be “outraged”’ 25,000 euros is loads. I have a feeling those spunky old priests will be roped in to do the Gardi’s dirty work for them. The priests, I can see, will act as sort of Stasi spies – the ears of the state, warmed through the grill during confession, they’ll take note of all the terrible indiscretions of their flock, the soft affronts to God. The priests rubbing their fat little tobacco stained hands together and waddling off to drop a dime on his fellow man. Nah, though, I don’t think it would be that bad to begin with. But then you have to remember the old priests are above the common man. They are God’s representatives on earth, propping up the papacy and meeting the bills on the line rental – direct line to St Peter. I hear the Pope on the eve of the G8 Summit says there needs to be global governance. Maybe all that mind control in the Hitler Youth about world domination and the Aryan Race has unspooled all over the inside of his mind. I can see behind those cold opal eyes

a former pin up boy of the Aryan Race. But maybe Pope Benedict isn’t such an oddball after all. Russian president Dmitry Medvedev held up a representation of the new world legal tender 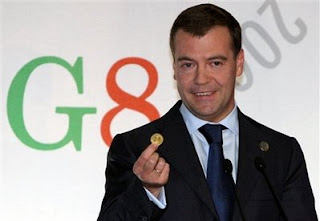 at the recent G8 summit. Canadian Prime Minister, Stephen Harper, says there needs to be a one world government. They’re all coming out from behind the curtain now. 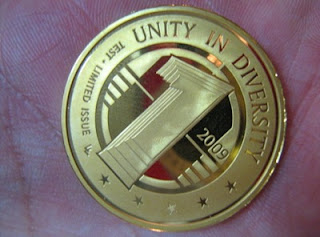