What Would I Say If She Asks What's New? "Nothing What's With You? Nothing Much To Do"

Just like a fucking dick I went and blew all that money I'd swindled off oul Granny in the Old Folks' Home buying up cocaine and Russian Standard vodka. So there would be no date with Deidre for the foreseeable, unless, that is, she were partial to McDonald's, cos that's as far as my coinage would stretch.
Also, due to these frugal shortcomings, I have left myself short – again!

I had all but a fiver to my name but still decided to take the bus into town so's to save my legs. Another reason for doing this was because the last time I were standing at my local stop a woman got off and gimmie her all-day ticket. This happened twice. Twice in a row. At this I felt very blessed. So much so that a kind of idolatry took hold, a holyman's convince-ment that this would happen a third time – and ascribed to this believe the classical holy trinity. 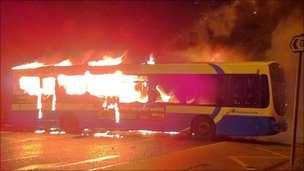 But it did not happen. And I had to pay the fucking larcenous £1.70 to take a ride over 2.5miles, if that. Fuck you Translink Metro buses. I didn't even find change on yer seats or under em – not down the aisle nor stuck down the connects in the long back seat – and I only got on yer fucking rolling extortion wagon so that this might happen....Though, I have to say, when the kind lady didn't step off the bus that third time today to offer me her (free) all-day ticket, I felt my heart sink, knowing a treasure trove of silver & shrapnel did not await, knowing it intuitively – for the magic trinity had been prematurely snuffed.
I dandered through town. Starving I was. I used this whirring hunger to hone my survival acumen, imagining it as one of those spinning, sparking wheels people use to sharpen swords on. I went past a stall with a man selling counterfeit Ben10 shite. He were shouting, - Five lighters for a poun'! - and I remembered back to when I were younger when mother led me by the hand round town round “all the shaps! Lookin for a bargain!” and I used to hear these men shouting “Five lighters for a poun'!” and I remember there was a WAY they shouted it, it weren't so much like they were making an offer, more like they were boasting about it. I remember thinking:

These men have all just landed themselves a bargain; a bargain of a lifetime by the sounds of it. They have been waiting out the back of some warehouse, some lighter warehouse, and they all, to a man, have been gifted 5 lighters for a pound. And now they are standing in the middle of the street shouting about it, like a William Blake lunatic loudly describing his visions or a newly converted religious fanatic pledging his devotion to some extraterrestrial hundred-eyed deity. Some even set up a stall to show off how many they'd bought...
...And then I had a brainwave walking along: You could buy up a loada those all-day tickets – photoshop the dates (which is how the drivers know you purchased them that day) print em out, scrunch em up a bit to get them authentic, then sell em on for a 1/3rd of the price...
So I dandered back home, back to my 'work station' to map out my plan.
My feelings were happy and my mind empty as I went back up my street. I started getting a hard-on imagining all the fresh fanny I'd get to slice after I got rich off my new idea. But in the ennui of my mental triumph I once again experienced a dark bleed-in of all the guilt I felt at swindling Imaginary Granny in the Old Folks' Home. It were a guilt exacerbated by the cocaine comedown that no amount of grass (bought for the purposes of mental comedown buffer) could shield me from.

But then, ahead of me, I saw Mrs Mulberry struggling along with her shopping. The beginnings of my penitence hand delivered! So I jogged along, took the old duck's bags with a smile and carried them all the way to her dining room table. And I didn't nick a thing. Sat and had a cup of tea with her as a matter of fact.
She asked me what I were doing with my life and I told her that it didn't matter what, in the here and now, but it WAS important that I felt it were gonna change...someday...only into what I couldn't tell right now...in this moment in time.
Posted by Danny at 23:14