Reuben And The Jets

This afternoon finds me sitting over Ludo and green tea with my pal Bogdan. I’m gesticulating wildly, telling him all the farout stuff Rueben’s been feeding me with when he switches subject to talk about early wanking accidents. I told him about the time I got caught by my Down’s Syndrome cousin having a wank over that crappy apocalypse movie ‘Warlock’. Then how I fobbed him of by telling him I was having an epileptic fit. I didn’t know but he went up the stairs and called an ambulance and I nearly got done for wasting the time of the emergency services. I remember one of the paramedics remarking, as he left the room ‘It smells like swimming pool chlorine in here,’ what he was probably smelling, I told Bogdan was my spunk wet trousers.
Bogdan told me about the time; the very first time he had a wank. He’d been experimenting for months, and this night he pulled and pulled and wouldn’t give up cos he knew, he told me, there was some payoff, that every time in months previous he knew he was within touching distance of the prize. Then he came. He told me it went all over his hands and over his cacks. The feeling, he told me was unlike anything he’d ever experienced before. He didn’t know if it were a good or bad feeling. Then he looked down at all the cum all over him. And – as Bogdan thought there was a flexible bone in a dick, and that he’d broken it – he thought that what came bursting from his Jap’s Eye was bone marrow. He ran down to his social worker mother took her hands in his and exclaimed that bone marrow had run out of his willy. She was very angry and screamed at him, asking him in disbelief if he didn’t know what it was he’d done. The next day she said sorry and bought him a book for boys, as he called it. 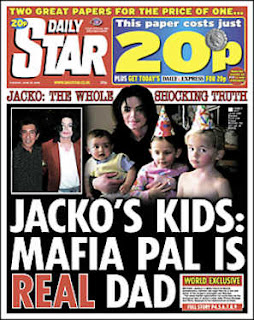 Just a note: I posted earlier, in Fact #2 that MJ couldn’t have any kids. Well, it looks like I stole a lead on The Star/Express. When I watched the paper review on Sky earlier I see they both have, on their front page, MJ’s paternity being questioned, with The Star wondering if the children’s real father is actually a mob guy! I’m gonna put myself up for a journalism bog award for that one ;) Rueben is a good source.