I Say, Wills Dont You Ever Crave To Appear In The Daily Mail Dressed In Your Mothers Bridal Veil?

Yesterday for the Royal Wedding Party Time had his cohorts round to talk about his latest wheeze, which is, like I said in the previous post, the importation and distribution of Crystal.

The only thing I have said on the issue is that instead of going to the trouble of importing it why not just make it up here. Fuck, the internet says it’s a piece of piss. Chemicals, some tubing, some other chemicals….but no….Party Time says the risks are too great, both in ‘law’ risky, and in ‘could-kill-yourself’ risky, as it is a dangerous game making Crystal. Very Explosive.
- Ah hove san many a few palls keelt in a math-lob act-splosion! – Went Party Time, lamentingly.

I still think importing it is most risky of all, but what do I know. Furthest up the rung on that particular ladder I’ve ever got is selling shit on in bars, grams and ounces, depending on the product.

After they’re done having their ‘sit-down’, as Party Time likes to call it Mafioso-like, we all sit down to watch the Royal Wedding. Luckily we tuned in at just the right time, just as the bony pony Kate emerged from her lovely posh hotel in her nice frock.

She is a bony pony all right.


Some hours later I read this claim by a commenter on Anna Grace’s blog called Valerie and thought back to her bony pony face.

“PS what did you think of the Royal Wedding?

GLUED to that screen, I was! Now I don't know about Wills but you want to watch that Kate. Someone told me the other day she was a notorious prostitute in Tottenham North London and a real one for the crack pipe!”

And I thought, reading this and casting my mind back not an hour or more: I can see that.

Some other thoughts I had regarding the Royal Wedding go thusly:

"as for that royal pair it was discreetly mentioned in the papers over here, they're cousins, distant cousins. man, i got thrown outta a bookies yesterday for asking if they did odds on terrorists attacking the whole thing, and if htey give out different odds on different organizations. but i hope they fucking do, and all hte fawning dickheads they got on the sky news tonight as well, blow em all to kingdom come! she's a sleeket bitch who has been i think placed under some sort of mk ultra like programming - and he is as useful as a paper shower curtain. he is dumb as dirt, and while he was v.sweet sixteen, handsome ways, he has now lost all his hair and his head is in the shape of a peanut. she, though, she's lovely. but now v.skinny. i thought once that if she appears on the money soon as queen it means you can have a wank over your money, yeah, vpretty...saying that by the time she's queen she be old and withered and have a resemblance to an old man's finger."


i wonder if he has forced her to let him up in the VIP entrance? i bet he has. i reckon this is how they choose their wives, the royal blue blood inbred twats.


just like a perverted Cinderella, wills has to find the right hole that can sustain his enormous reptilian dinosaur cock (as they are all reptilian shape-shifters, the royals) - the exact right fit, for there is a girl out there that will - it has been predestined through dna, and it will most likely be a relative of his!


but really though, they're all, the royals, baby eating, human sacrificing satan worshipping (all for real!) oddballs, y'all!"

And in response to these pictures from here: 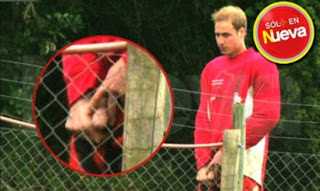 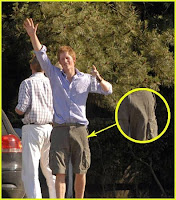 "Its not their penises, its diana's nose (harry's got the cloned one) that they keep tied round their leg, and keep with them as a lucky charm....i'm. ABSOLUTELY sure of it Infomainiac!!!!"

Some time through the day I got monumentally bored.
I suggested to Rhonaldo, Billiard, Slug and Party Time we have a circle jerk (wank race) and I open a book on it.
So that’s what we did. Party Time recommended the odds on me were shortest as I had a great cock, but that it had a hair trigger.
- Cant con meek hamshelf cam jooz bah thee site aff hees ahn cack! – Went Party Time.
Slug complained that with the Queen keeping on getting into shot it would put him off, so we placed him as the rank outsider.
The Sky News cut to the balcony and we were off…
Billiard has his great pale belly pulled up out of the way and was going hammer and tongs, his face near as purple as his bell end with all his concentration.
Party Time’s wouldn’t work, and the more frustrated he got the more he pulled and jerked at his big brown trunk. At one point he yanked at it so hard I thought he was gonna rip it off.
Rhonaldo and Slug had a good rhythm going, very boring, and I sat there stroking all my half-a-foot, slowly and smoothly, working up a fat little bead of precum before slathering it all over my helmet’s edge…
And just like that, when the new Royal Pair lean in to share their first kiss as a married couple, I shoot the shit just as their lips meet…right in their fucking faces… 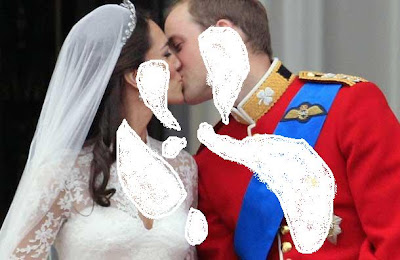 We all laughed and swapped coin…