So we spent the last couple of weeks, me and Kimba, but Kimba mostly, devising ways to induce the oncome of our triplets before she reached full term. We’re not too sure but, if what I’ve read about Bill Clinton and his views on partial birth abortions are anything to go by, then as long as the ‘triplet miracles’ (as Kimba has come to call them in an ironic poise) are still in utero, and you kill them while they’re in there, then you can’t be done for murder. 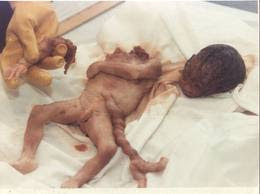 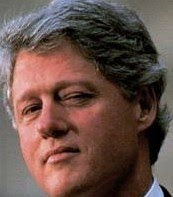 The first idea we had was mine which was that Kimba would eat a hankie I’d sneezed into while I had the flu. The germs would go through her system and the triplets would eventually become infected due to their weak little flowering immune systems not being able to withstand them. They would thus die in utero and she would miscarry them absolving us of murder if questions were ever to arise.
- I’m not doin’ that, Danny. Feelin all that dry tissue goin down my throat, I’ll gag. I have a very sensitive gag reflex, said Kimba.
- Maybe you might boke them up then, I said.
- Don’t be stupid! That’s nearly as stupid as your hankie idea!

So sure was I that my idea would work I waited till she was asleep one night and tried to shove the hankie (which we’d kept in an old Durex box) down her throat. She shot up in bed, as if her frame were being driven by demonic possession, and boked her ring up all over my chest and face. A liquid rainbow of bile hit me right in the bare eyeballs blinding me and a lot of it landed in my mouth. I inevitably boked my ring up too covering her in near-fresh blue wicked and pastie.

I slapped her about a bit and she reached behind her getting a iron and clattering me upside the head with it. I fell off the bed backwards head over heels and landed right smack on the top of my head, rendering me dumb for a good minute. I tried to speak but it felt like my throat were clogged up with cotton, and I thought maybe this were an instance of instant karma where the suffering and torture I were to inflict upon Kimba was revisited on me.

We made up afterward and she gimmie a hug and I hugged her back taking the opportunity to stick my thumb up her bum into the bargain. She flinched, then she said:
- Show me that stuff about Bill Clinton, again?
- What for?
- I’ve got an idea. You seen those adverts for those leaf blower machines? They’re aimed at old men who can’t rake up the leaves themselves cos they’re too old, depressed or sore? She said, autisticly...
Well if I can stretch my fanny wide enough I think I could fit one of them up there, she said trying to stretch her labia far enough so’s to fit round her above average sized fist (for a woman).
- Lets go, she said urgently as a woman going into labour ---- - Get me a bowling pin from somewhere. You’re on a full strike tonight, Danny. Fuck the Dundonald Ice Bowl!

Later when she explained her reasoning to me (which I’ll post at a later date – maybe tomorrow; maybe not) I put this track on the turntable and let her enter me through the VIP entrance (take me up the arse) with her strap-on.