You Clipped My Wings Before I Learnt to Fly. Unspoiled. Unspoken. I've Outgrown That Fucking Lullaby 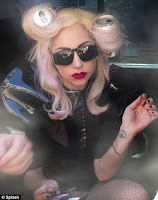 Lady Gaga hasn't called back yet. Don't think she will.

Party Time scored for us some nice yellow coloured speed today off this jittery Polish chap who looked like he'd Cerebral Palsy or like a real bad series of tics the way his head popped off to the side or the way his frame jerked..

He picked us up in that lay-by by along the Lagan Towpath, before you get to Annadale Flats, which is somewhere I used to live. This little lay-by is well of the road, and I imagine at night a good spot for dogging. It were my contention to Party Time that you could rig up little cameras and mics in the foliage area along the edge of the towpath and that you could make good blackmail money off of it.
- Bet you'd make the King's Ransom, - I went.
- A fockhan fore-tune – went Party Time. - It ash mah believe ah believe thah yah wad Gat sam Hagh profall faces at thah' rand hare?!?
- Yup... - I went.

The jittery Pole got to us just after sundown.

He took us up through Stranmillis. We came up along some of these little co-eds walking along and he wound his window down and started barking like a dog at them. They wiggled along in their sheer leggings with their VPL laid out like fuckin veins on a smackhead's arm. I was feeling mightily embarrassed by the jittery Pole's barking. Every time his frame jerked the car lurched over to the side. A couple of times he nearly went up onto the footpath – the second time nearly careering right into an old granny carrying a bag of Satsumas.

We met his man down the Lower Ormeau. This bunch of psychedelic punksters – their hair dyed psychedelic, garish yellows and reds, - lived in the house we went into. Most of them spoke Eastern European languages. Fat Sandra was there with her fella. She was, like every other time I've seen her, tearing little corners of a roll of toilet paper and eating it.
- Hello, Fat Sandra, - I went.
- Who as thahs cant? - Inquired Part Time.
- This is Fat Sandra, - went I.
- Ah rat, - went Party Time.

The jittery Pole, who'd been summoned into a back room when we got in the house, came back out with a crouched over old man with a white beard and long white hair, who I reckoned was the fabled Gandalf of the L______ R___. The old wizened cunt proceeded to try and freak me out by standing dead close to my person and making out like he were throwing little bits of things at me. He would hold his hand up, lining it up with his eye, with his thumb and forefinger only an inch or so apart, like he held something daintily within, like an object, and he would draw it back a little and squint, like he were lining shit up, then he would go to throw this thing at me, but really there was nothing there, but he were quite convincing in making believe there was, and trying to get me to believe the same. When I told him I could see the balls, that they were the size of about Brussels Sprouts and black in colour, he laughed ruefully then ceased his shenanigans.

He give me and Part Time a good deal on the speed he sold us.

Part Time's mind is like a major city's citizens after they've been overrun by an invading army during wartime. It is susceptible to the crudest of propaganda. Fuck's sake – I once told him the provo's had an airforce and if you were out and you heard an air raid siren you had to go seek cover under the nearest thing – cars, whatever.

One day when we were kids, some time round Christmas when he were over for a visit, me and him went up to my pal Bogdan's house. I'd given Bogdan reasonable forewarning of our coming up to his and made him privy to my Provo airforce yarn. I told him to cue up his sound effects CD in his HI-FI and to put it at his window and wait for my call. When he saw us at the bottom of his street, I told him, he would play the recorded noise of an air raid siren from the Sound Effects CD through the HI- FI at his window. And so when the young me and the young Party Time dandered up Bogdan's street that cold Christmas week afternoon we suddenly heard the noise of an old WW2 air raid siren echoing through the place, and Party Time dived under the nearest van griping loudly about the Irish being the blacks of Europe and how where he was from this was just bakers' buns, airforce squadrons flying sorties.

Later on Party Time, after huffing loadsa speed, told me about how now he'd got word that he had a little newborn nephew back in where he's from.