Was in two minds today whether to dander into town (one thing I haven't mentioned is that my motor's packed in). But I did as I reckon being a man of limited means and fewer prospects I will never leave the Bellshite, nor, in my lifetime, get to see the denizens herein getting their two-tone psyches so lavishly catered to by such a grand American extravaganza – the last big American extravaganza of its magnitude probably being WW2.

I thought to myself, approaching the giant luminous blue-tit biodome of the Victoria Square Shopping Centre, that really things were no busier – just as many feet on the ground – as any other Saturday afternoon – but there was a difference – a difference evidenced in the deep, swirling glazed eyes of all – and I started to realise that every conversation I were in earshot of were to do with the fucking #MTVEMAs. Old and young alike carried themselves like they were the protagonist in some NI Tourist Board ad on 'The New Emerging Belfast'. 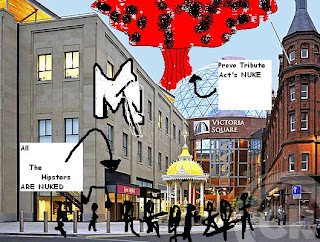 Clusters of impeccably togged up hipsters with well-sculpted hairstyles mingled between Starbucks and the Kitchen Bar – boys and girls 18-25, 25+, - The Relevant (cos this is the demographic where yer chances and spending power are at their optimum) swarming like germs and white blood cells. In amongst them all the old (anyone above aforementioned age bracket) permeated like incorporeal wraiths faintly making their presence felt in this dimension. I were one of these zombies. I staggered trough them all in my tracksuit/pajamas and my big yellow mac feeling like a refugee from some underground city come up into 'civilization'....The hair-swishing make-believe, the poise outside bars like they imagined they were gonna be surreptitiously pap-ed any minute, the boys in their shades long after the frigid sun'd gone in, the old getting lost, being, “are we going the right way” - made me (for once) relish the sight of nearly two-dozen pigs – if only to make the spot a legitimate target for the latest Provo Tribute Act... 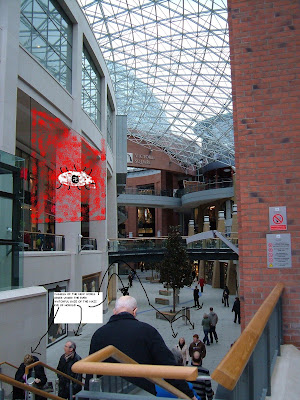 I went down into the belly of Victoria Square, down into to the subbasement car park for a quick toke. Down there I could see right up through the crisscross of escalators, right up to the dark-tinted areola of the luminous blue-tit biodome, the capstone of this murky “shopping mecca” - and as a mecca it possesses our unmistakeable drab Ulster piety complementing perfectly Consumerism's universally dark architecture. I was struck by a vision then, a memory from my own future, or possibly that of a future incarnation, slipped from the bondage of Eternal Return that this awful place would soon house a great many number of citizens, corralled in here, the walkways and platforms and deep, voluminous square stores fulfilling their true purpose, which was to act as a 21st century gulag --- In my vision I heard the groans and the occasional scream of the emasculated future citizen, under the yoke, body and soul, eyes leaping out, spurred by memories of criminal spectacles more grotesque, more baneful than words can tell...then these screams from the future, full of dread and suffering were replaced by the screams of the now, the present, which were full of hysteria and insane, uber-longing...

I went up the escalator gingerly, dropping down every few steps when the thing brought me too near the top. I could make out this mass of feet running – as one – from one side of the complex to the other – clad in identical trainers – they resembled in their kinetic mass the birds going round and round the Albert Bridge looking for a safe perch for the night. 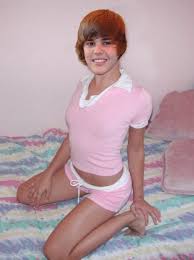 Justin! Justin! - They screamed. From the car park behind me I heard a screech of tyres and imagined it was the dulcet smile-android being spirited away by his Illuminati handlers. It seems his pubescent, foamy-gashed fans had kenned this fact also, and sensed his leaving the vicinity, for they swamped the escalators (the down one AND the up one) forcing me to leap into the gutter in the middle and slide back down to the bottom like Al Pacino at the end of Carlito's Way. The harried me and knocked me as they stampeded after the limo and as they went I watched for the legal-looking ones and give them all a good groping as they whizzed by.

Another lasting impression was the amount of twats that done themselves up to resemble the famous ones, in order I reckon for them to possibly experience the blanket adoration and attention, if only for a minute or two, before the ego mosquitoes twig it isn't really the ''slab', and fuck of spitting and cursing at the trembling fame-starved cunt. For example, I saw three Lady Gagas around the place, with one of em so authentic looking she got approached by two journo looking types and a man with a proper looking press camera. When the kids got a load of this they came running too, obeying the tic-tac-toe of their celebrity obsessed minds. I, too was drawn into the maelstrom, around the outside, to see if it really was High Priestess and baby-eater Lady Gaga...but the girl opens her mouth in response to some generic questioning from the journo saying:
- Wah??? - Fock Aff! Aye, I gat mah tackat here, so ah do! - and she pulled it outta her cleavage, that elusive (figurative) golden ticket, when one of the popster's from the rabble's arm shoots out, snatches it off her, and this wee anorexic looking bint peels of from the screaming heads, like newborn hatchlings, and takes off down the street with it bawling in a high, helium pitched tonality befitting of her weak looking little frame.

The poor Gaga-a-like stood there, tears tripping her, till she were pushed into the wall and the hordes chased the ticket-stealer. 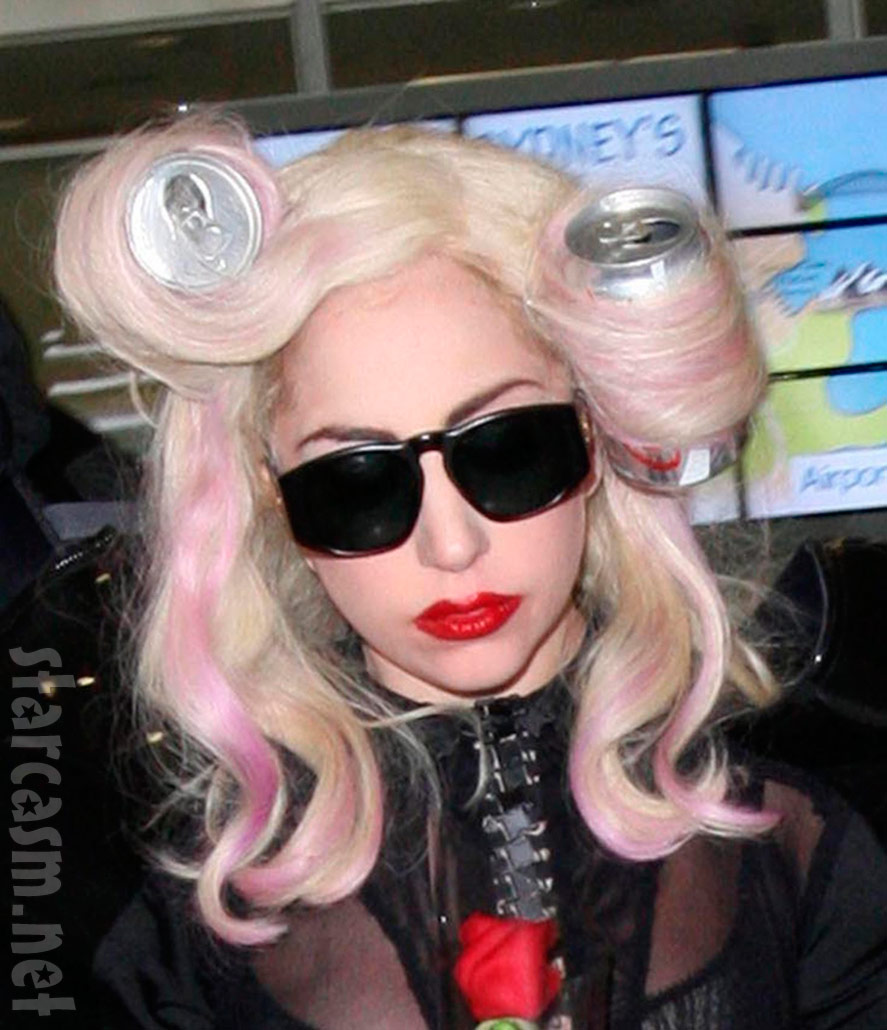 I remained and took a good look at Lady Gaga. On closer inspection she didn't really make the cut. She'd a load of Harp beer tins as curlers in her (well) dyed peroxide mop, but she weren't skinny or short enough, her makeup was too off-white and her left ear was askew in the fashion of a dogeared page in a book.
Where you gonna go now, - I went.
Nowhere, by lucks ahf thangs, sobsob – she went.
Wee bitch, eh?
Yup.

I took her for coffee and she took her Harp-tin rollers out and wiped off most of her makeup. She wiped her lipstick off and rummaged around in her bag for a bit then emptied it onto the table. Amongst a load of balled up tissues, keys and around a dozen jubes there were lots and lots of lipsticks. She took the tops off three of em – electric citrus, Kylie Minogue Pink, and Big Top Red. She considered them all for a bit then applied the electric citrus. She looked good.

We walked through Victoria Square the rest of the way and I spotted more of those studied celebrity doubles – the twat taking the prize most modeling himself on David Guetta so good that while going along, carrying a load of records over his shoulder, he got mobbed by a bunch of popsters looking smile-android Bieber's mobile no.. The popsters, though, on inspecting his bag of records, discovered they were no more than a bunch of cardboard squares, but not before 'Guetta' got their numbers off them promising to 'pass them on to Justin.' I wondered how many of these celeb-a-likes going around were the attention starved, starry-eyed celebrity-aspiring, and how many were possessed of murkier intentions – their resemblance to the authentically famed being the bait of these toothsome 21st century pied pipers...
I asked Lady Gaga about this. She said, - Dunno about tha', Danny, but I tell you wha' – plenty of pink ballets in the offing the next couple of days...

We reached Corn Market where a lonesome nut were loudly positing that the whole affair was nothing more than a 'mega-ritual' a simulation of 'occult blood-sacrifice' and a nod to a kabbalistic-masonic esotericism – the teachings of which belonged to them (and them alone) running the world behind the scenes of common times.
- Fuckin hell, - I went.
- Realer than you know, Danny – said Lady Gaga. - ...And dey will stage some blood drenched bestial sex rite – they will fetishize our approaching police state with scantily clad centurions of the street...- Still the mad cunt was sporting the best Tee of the night – what took me ages to source...

I took a hold of Lady Gaga, up an alley off Linenhall St, and frigged her till she started seeping at the hoof. She wanked me to I shot it out all over her tight tigerprint one-piece then she took my arm and we walked away, and I said,
You bunkin up with me tonight, Gaga - when a little cunt came up behind us and snatched her bag with all her jubes in it...

I'd only my own busfare left to get me home, where I'd speed and my nice green from out west. When I told her I was holding she jumped at the chance to come with – and on the way back on the bus the conversation went thusly:
- I gonna get to slice you anyway, girl? - I went.
- Nope. No jubes neigh wuh that wee smick strokin' mah beag.
- Yeh, baby, but you get the morning-after pill the marra?
- That costs £30, dickhead.
- I go halfers with you?
- Nah. Don't trust you. What you go on you? £1.70 for thuh bus? And I won't hoave the whole £30 on me neigh I ain't got out tah work the night.
- Shitman. How's about you say I raped you. Then you go to the cops and they'll get you a abortion for free if my seed gets fertilized....
- She pulled this thing from her bag then. I thought it were a TV remote control at just glancing at it, - You know what this is felchy breath? Its a tazer. You try any funny business wih me the night, I'll fuckin zap ye. I'll come, smoke yer grass and huff yer speed – and what you geh out of it? Mah number.

So we went back to mine and she huffed my speed, smoked my weed and like she said, she gimmie her number – and at some point she picked this un and put it on the turntable...
Posted by Danny at 02:16