He Said: All Things Pass Into The Night 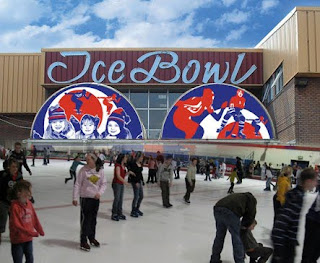 After I got my money selling all Micheesha’s kids’ presents I took myself to Dundonald Ice Bowl for a skate.

It is something I haven’t done for years, skating. Gliding around there. Figures of 8. Round and round. Wheels within wheels. Not a care in the world. My troubles, with my shoes, left back in the locker room.

When I was done I sat in the grimy cafeteria overlooking the ice rink and ate one of their grey-meat shite-burgers watching this young scamp, 16-21, sail by, his nose in the air, very imperial and apart.

I sipped very slowly on my soda waiting till he were done and when he was I went over to him in the dugout by the rink. He were putting his loafers back on and fixing his hair in the mirror.
- Way you glide along on that ice you’re like a falcon in flight. – I said, right in his ear.
In the mirror’s reflection I could see his cute, tight smile stretch and part revealing by scintillating degrees his beamy white teeth lined up in that sweet young mouth of his like the most beautiful row of marble tombstones.
- That’s novel, - he said. – If I’m your falcon what does that make you…my prey?
- Could take you for a drink and find out?
- Lead the way, young gun… 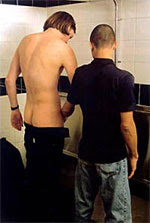 We sailed about Belfast city centre in my motor looking for a place to park. All the while Shaznie (as he preferred being called) had his hand on my leg telling me all about his life and his beliefs.
- …so that’s why, in 2012 the world won’t come to an end, like tidal waves and beasts rising from the sea and all that shite, no…it’ll be like telepathy and free love and getting high of the heat of the sun, all those good things, dude. All not more than a year away and when it happens….all so beautiful.
- Dunno, babe. Never even that confident about what lies ahead 24 hours from now, never mind a year and a half.
- Ah, but no. It’s written. It’s going to be. We’re due a galactic alignment. This earth. Mother Gaia. We’ll shift dimensions till the 4th dimension. We’re moving into a photon belt. It’ll change our frequency vibrations. It’ll all be so different and beautiful. You can’t imagine!

Even after we’d had a few scoops in town and got back to mine he was still talking this balls so it ended up I’d to stick my fingers up his hole and that soon shut him up.

It turned out he was a good lay. Generous and receptive. Imaginative and yielding sweetly.

Later in he living room over coffee, 3 in the morning, being watched by a put out and confused Boke the Cat, Shaznie asked me about myself. I wasn’t even 3 minutes into those old mistakes and regrets when I break down and give a blow-by-blow account of Kimba and all that pertains to her. And he told me (Shaznie) that I had to put her to bed (figuratively) for myself if no one else.

The kindness (and wisdom) of strangers…