Today I was laid up with the cold and watched hours of TV, one of my favourite things to do. There’s an ace Handsome Family song, called Drunk By Noon. One of the lyrics goes: 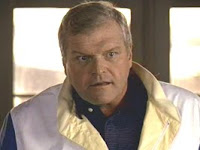 During the channel 5 movie, which today starred Brian Dennehy, and which was very boring, I listened to this song on my Hi-Fi. For me the novelty of being laid up wears off quickly. Due to some internal working of mine I am unable to fall asleep and snooze through a flu/cold. Today I made do with trying to make shapes and objects out of the nicotine stains on my ceiling. Much like cloud spotting that, only like a sort of hell for sinful cloud spotters, where they can do nothing other than stare at the same clouds for all eternity.

My favourite movie to watch when sick is Hannah And Her Sisters, which coincidentally is the

same film that Robb Flynn, lead singer of hard-ass Californian band MachineHead, likes to watch when he’s sick, too. Barbara Hershey can still do it for me even when I’m sweating half my body weight out with a temperature over 100degrees. I’ve a feeling Robb Flynn feels the same way.

Which brings me on to today’s Porn-a-Like, which took up a great deal of the afternoon/early evening to find - up until Coronation Street came on.

Today’s Porn-a-Like is Andrea Catherwood, newscaster from Northern Ireland. I like to imagine Andrea has lost the will to live, reporting all those war casualties from Iraqistan, and so, to inject some zest back into her automaton existence, she takes on the roll of a call girl every Saturday night. Way to go, Andrea!

Tonight’s Coronation Street Double Bill was fantastic. Firstly, Tony’s madness has come to the boil and he has perfected that shiftless psycho stare that would make you feel like you were pissing into the lightening were it to fall on you. When he breaks into autistic Roy’s cafe looking to kill him he moves like the terminator when he’s in that nightclub trying to find Sarah Connor. You could hear every stainless steel joint creek.

Gary Windass is thinking of joining the army. His mother’s and other Coronation Street residents reaction to this I found surprising, in that they ridiculed him and warned against it. I would have felt that the producers would’ve had an obligation to their sponsors, Harvey’s, to have characters actively support the war/recruitment to the army. Because after all, it is Harvey’s who have won the contract to refurnish all the Iraqi’s new houses the coalition are building for them after they’re done carpet bombing all their old ones. Build them all shiny new democratic abodes, with all the mod-cons, and, this is where Harvey’s comes in, all in need of some nice plush sofas and those ornaments that come alive during the ad breaks, which in a duel capacity will keep those mad mullahs in line. 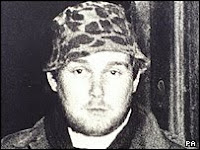 But whatever. Yet I have this suggestion for the scriptwriters: Gary Windass goes off to war, comes back battle scarred and a bit mental and promptly garrottes his good-for-nothing dad Eddie, then knifes his mewing ma, Anna, to death, stabbing her 874 times, a UK record for numbers of stab wounds in a knife murder (this fact is quipped upon my Norris a fortnight later, when the shock of the incident has subsided, the quickness due to soaps’ sped up laws of time which is 6 times faster than in this dimension). He then goes out onto the street and does a Hungerford. He bursts into the Rovers with a 12-guage and blasts a massive hole in the alabaster bake of 64-going-on-21 year old Liz McDonald. Steve McDonald, her son, does some of his giddy man-child astonishment + bemusement shtick and throws his hands high in the air and flexes his fingers about like a brain damaged toddler when he sees this, and Windass blows his fingers off. Betty gets it through a hotpot she’s carrying out from the back, which causes the fragments of the plate to fly into Ken Barlow’s eyes, blinding him (3 years later he gets so fed up because he can’t read his boring classics he kills himself). Windass then kills Audrey Roberts, David Platt, Mad Joe The Kitchen Fitter, and E.T bake herself, Gail Platt. 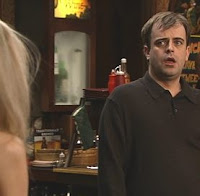 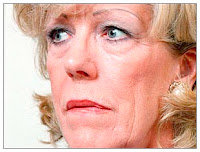 Tight mouthed adulterer Kevin Webster gets it next as he works in his car repair shop. After Kevin is shot to death Windass continues to fire more rounds into the garage causing a fuel tank to explode, which somehow blows up the Underworld knicker making factory killing all inside. Windass’ gun spree then abruptly comes to an end when Jack’s pigeons swoop on him a la The Birds and cocoon him in a pile of toxic pigeon shit, which is henceforth kept there as a remembrance off and to the great Coronation Street Massacre.

Just a suggestion, Coronation Street writers, if you’re reading. You could wipe out half the cast this way in a character referb’?